While Judge Pratt has not retired from the practice of law, he has left our firm. Jack Barnosky delivered the following tribute to Judge Pratt at his farewell reception on October 31, 2016. 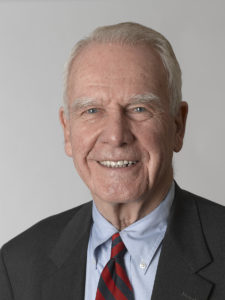 To say that I go way back with George Pratt is an understatement.  I started at the firm on January 5, 1970, which will be 47 years this coming January.

The name of the firm at that point was Pratt Caemmerer and Cleary—I was the fourth lawyer at 195 Willis Avenue.

George Pratt was my mentor.  John Caemmerer was a pol and didn’t really practice law.  John Cleary was very smart, capable, and lovable, but a mentor he was not.

I came in to do estate work with which I had had a few years experience.  They had 30 or 40 estates open and I thought that would keep me busy.  It turns out that 26 of those 30 should have been closed a year before, so in short order I had a lot of time to do a lot of different things.

George had no hesitation about sending me to do things that I knew nothing about.  Within months I was:

The first thing I learned is that no matter how hard I worked, he worked harder.  I mean I was the young kid on the block and I thought I should be working harder than anyone, but no matter how early I came in or how late I stayed, it seemed like George was there before me or staying after me.

I learned about discipline.  I remember that after he tried a case, George would come right back to the office and dictate the outline of what the Post-Trial memo would say.  He told me it would never be fresher in your mind than then.  Sometimes I’ve done that, but other times after the last day of trial I am more tempted to stuff everything into the lit bag and go out and have a beer with someone.

I learned about legal writing.  I was an English major and thought I knew how to write.  George taught me legal writing:  eliminate all the adjectives, write in the active voice, use bullet points, eliminate all the filler phrases like “it is accordingly submitted that” or “under the totality of the circumstances”, etc.

I remember George telling me in connection with a case he was trying “evidence is evidence” and if a key document gets in through an admission, through a witness, through stipulation, or any other way, it is still in evidence and there was no need to guild the lily, especially in a non-jury trial.

Of course, these lessons were not learned in a pedagogical way with explanations or by tutoring.  You would see a markup of a draft or a change in approach as you were plotting strategy, all very softly said and rarely with explanation.  You just observed how George did it and knew he was right.

Of course, with all that talent and character, there had to be a few idiosyncrasies—and there were:

We all know that when we moved to our Hillside Avenue office and were doing construction, George closed up the window to his office thinking that a view would be distraction and he liked having his books behind him.

George would often come in early and dictate extensively onto cassette tapes.  He would then leave four, five or six tapes on his secretary Ida’s desk with a note that said I need this by 12 o’clock.  He would then go in his office and close the door.  It mattered not if half the staff was sick that day, or that some other attorney had a Brief due in the Court of Appeals, or any other emergency, Ida knew those tapes had to be done by 12 o’clock and George never knew what was going on in the background to accomplish that.

Of course, I learned also that God isn’t particularly fair when he hands out talent.  In addition to being one of the smartest people I have ever met, George, we all know, is incredibly gifted musically (I remember at lunch one day in Mineola when the church bell rang he said, “Did you ever notice, Jack, that that bell is a perfect B flat?”  I told him I hadn’t noticed).  He was an excellent skier and I’m told a very capable tennis player.  Of course, he had a wonderful wife, Carol, and four terrific children.  And his record and reputation as a District Court Judge and on the 2nd Circuit Court of Appeals speaks for itself.

I am proud to have been a colleague and partner of George Pratt.  In large measure he is the embodiment of the spirit and culture of this law firm.  I know he believes giving up practice at age 89 is “early retirement”, but on behalf of myself and all of us, I offer a toast to George and wish him well in whatever he now chooses to do.  A toast!

If you wish to contact Judge Pratt, e-mail him at gcp@gcpratt.com.